My previous work has mostly involved SPI-based flash, but more modern devices like the Meraki MR33 have only NAND storage and there are instances where it is necessary to modify the contents of NAND using hardware means (e.g. to downgrade u-boot before flashing OpenWrt).

There are a wide variety of hardware NAND flashers available on the market, however they are often expensive, proprietary, and slow. Hardware flashers like a Teensy++ 2.0 running NANDway or the NANDLite (which are both quite inexpensive options) will work for reading data, they are not at all convenient if you want to modify the data and rewrite it. Every NAND chip is unique and has its own bad blocks which you should take into consideration. The net result using these programmers is that you have a very slow workflow: you must obtain a consistent dump of the NAND through a device which often reads at only 100KB/s, modify the contents (recalculating ECC/OOB), and then write it back to the NAND.

Why bother with all of this when Linux has a very robust and fast mtd subsystem in the kernel? 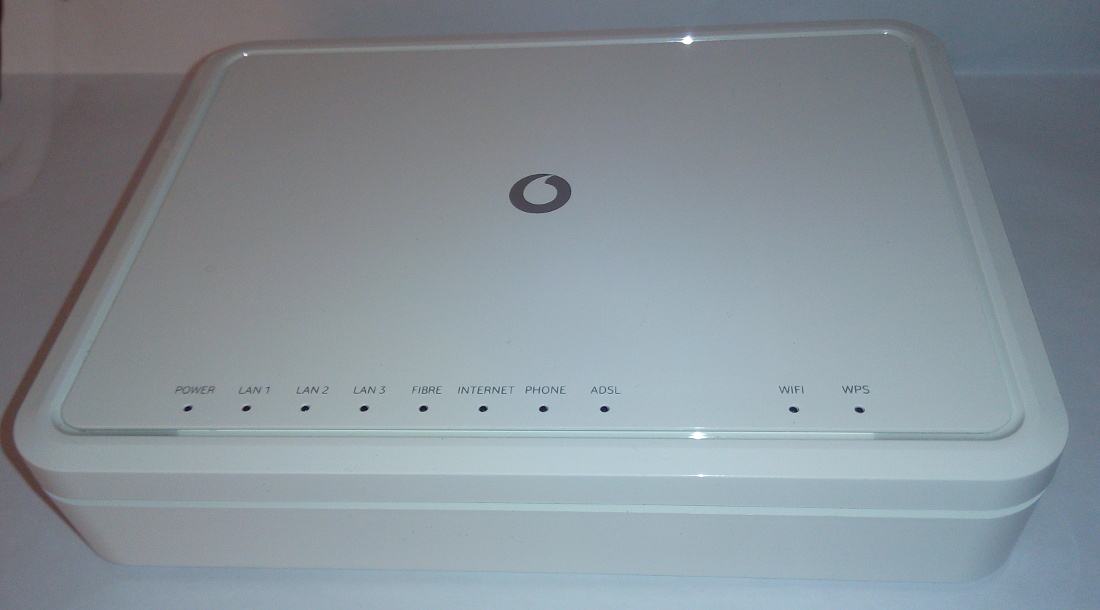 The Sercomm AD1018 is a DSL router originally produced for Vodafone España and based on the Broadcom BCM6328. There are two hardware revisions, which are the same apart from the amount of RAM: v1 has 64MB of RAM and v2 has 128MB. It can be found on eBay from Spanish sellers for less than 20€, and is supported by OpenWrt. As a bonus, you can easily modify the hardware to add SPI flash and then boot OpenWrt off of SPI.

With the operating system booted from SPI, you have a free NAND interface to do what you want. What do we want? A cheap, Linux-based NAND dumping and flashing platform!

However, there is a problem. The “NOR” OpenWrt image for the AD1018 doesn’t include support in the kernel for BRCMNAND so although there is support in the device tree for the onboard NAND, it is unusable in Linux. This makes the device significantly less useful as a NAND flashing platform.

This is easy to solve though: copy the kernel configuration for the smp target, which includes NAND, to the generic target:

You can download the binary image to flash from here.

After flashing the NOR release of LEDE as described in the installation instructions, simply flash the new NOR image with BRCMNAND support using sysupgrade:

After rebooting you should now be able to access NAND flash from OpenWrt:

Until now, apart from installing the SPI flash, we have only addressed software issues. The kernel output above is the stock NAND which is soldered to the PCB, not exactly practical for flashing NAND from other devices.

The OpenWrt wiki suggests hand soldering a TSOP48 socket to the PCB. I am here to tell you there is a much easier method.

You can purchase TSOP48 sockets for around $5/piece from distributors (or AliExpress) however I dislike these because I still sometimes have difficulties soldering the 0.5mm pitch of TSOP48, and wrecking a TSOP48 socket while soldering gets expensive quickly. In my opinion, there is a cheaper and easier solution: use a 24 pin 0.5mm pitch FPC connector and a TSOP48 socket for a TL866II. 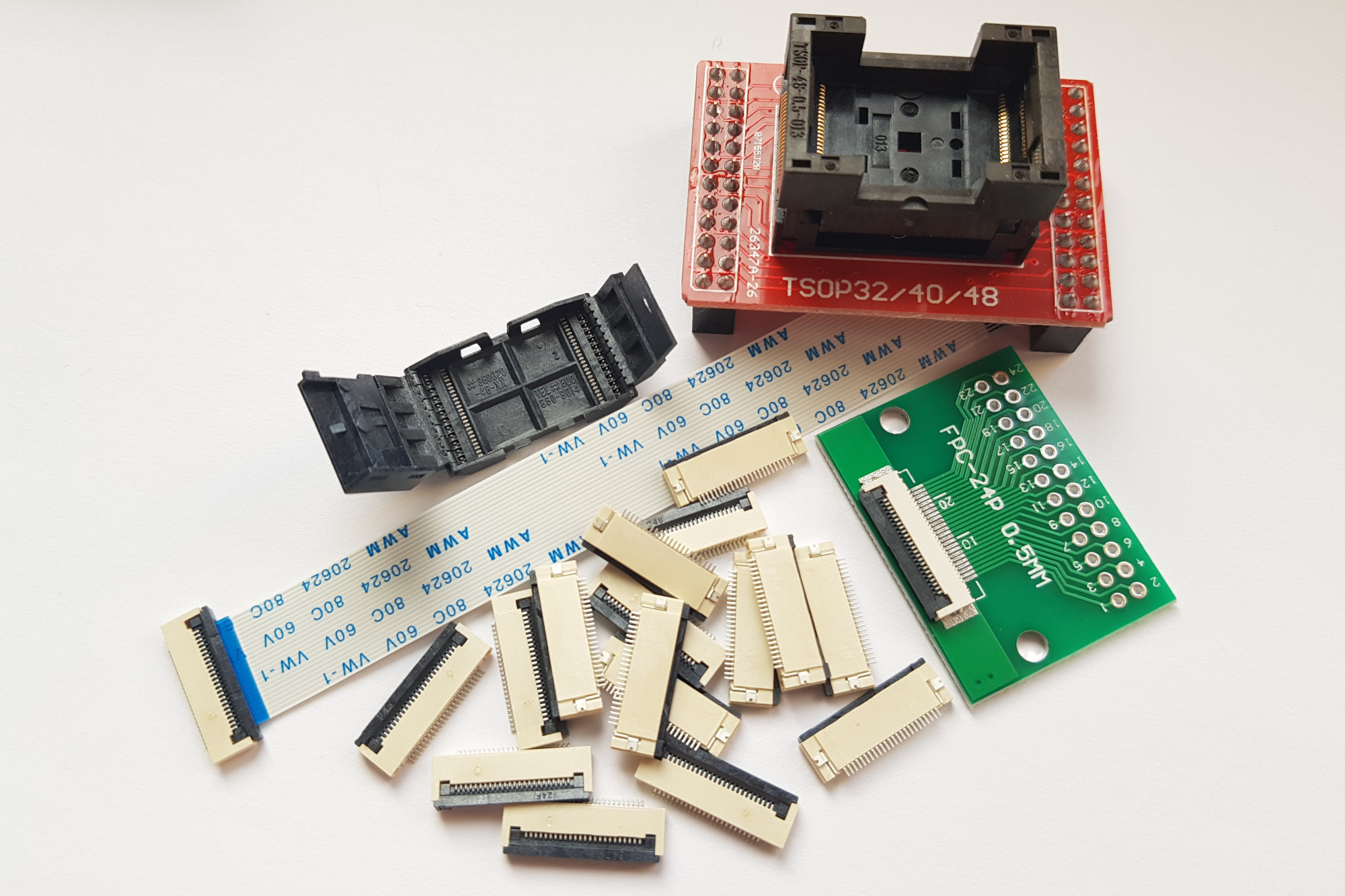 When mounting the FPC-24P 0.5mm breakout boards, note that the odd-numbered pins are always on the outer row. 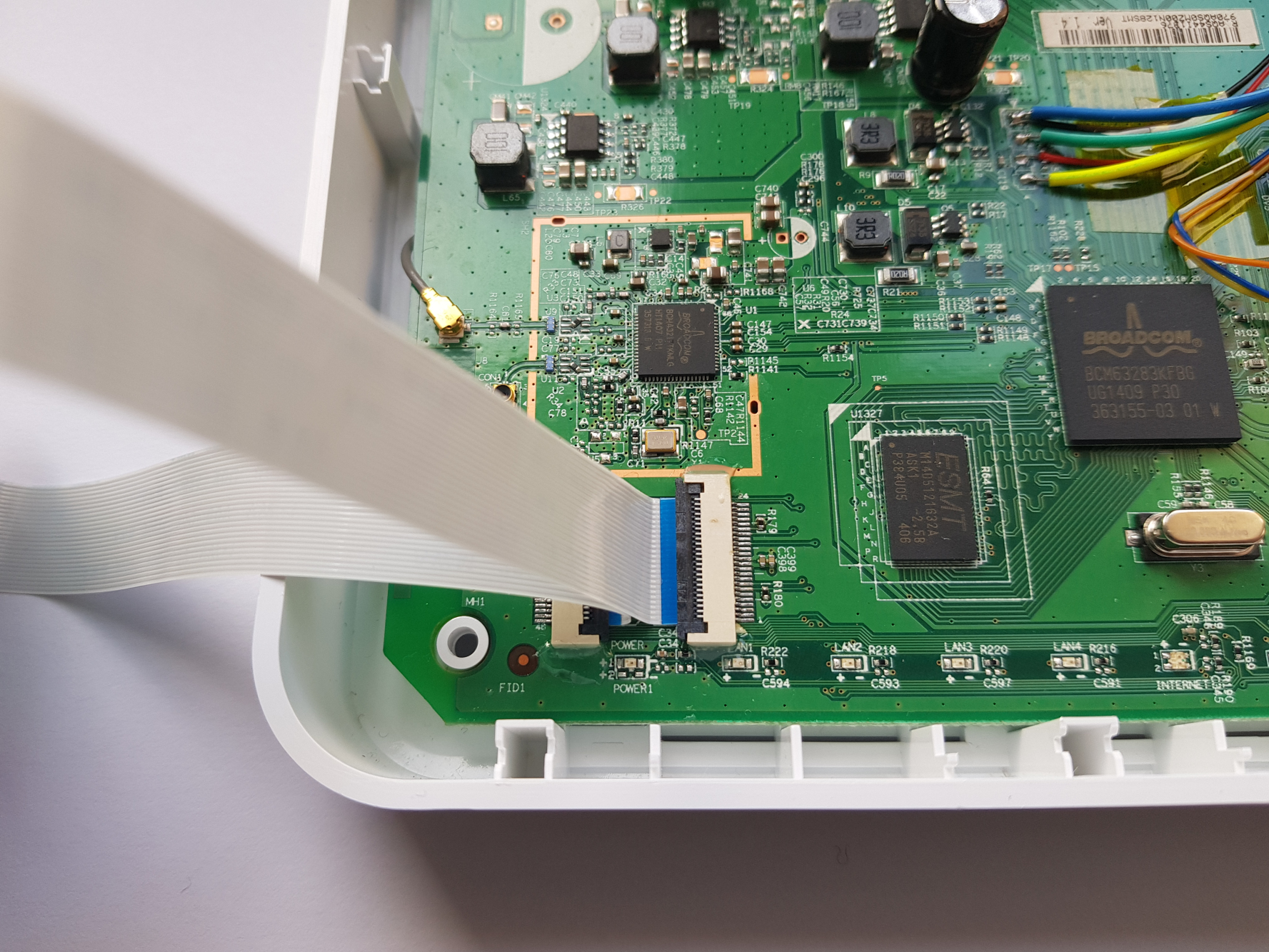 Finally, after cutting a small slot the flat flex cables can be routed outside the enclosure and the TSOP48 socket can be securely mounted 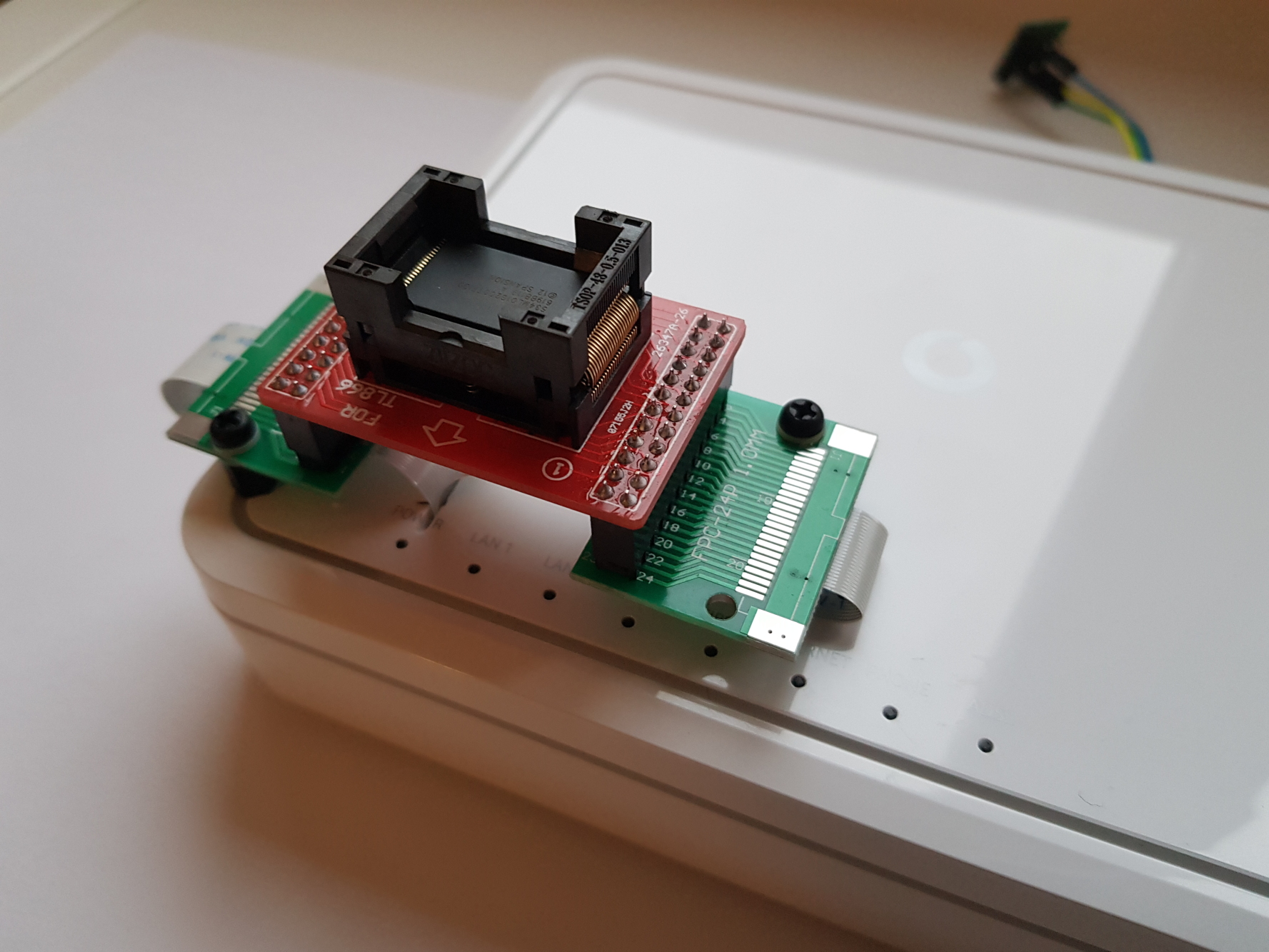 Now it is possible to put the TSOP48 NAND from another device into the socket and use tools like nanddump and dd to manipulate the contents. Since it is OpenWrt, you can even mount a remote filesystem using NFS, sshfs or similar to have even more storage.